By: admin
In: Lawn Mowing

My one day of rest for the week, and an opportunity to mow my lawns – which I’d been delaying for about three weeks. (On the plus side, the damp micro-climate in my back yard yielded three more lovely fresh mushrooms for breakfast today, along with chorizo sausage and two eggs.)

First up, TVNZ’s Q+A at 9am.  A great interview with Dr Ayesha Verrall who said it was too early to tell how we were progressing with controlling cid19. We needed more data on community transmission, she said.

Dr Verrall was also concerned with how covid19 could be easily transmitted in lower socio-economic areas where low-income families were living in over-crowded housing.

She was forthright in advocating more restrictive practices, saying that the more retail outlets like Noel Leemings, Mitre10, etc, that were open to the public, the more gatherings would occur where transmission could take place.

In a crisis like this pandemic, it’s more worthwhile listening to scientists and medical professionals that business people and National Party politicians agitating for businesses to re-open earlier.

Following Dr Verrall was National Party Leader, Simon Bridges. He advocated full quarantining of arrivals to Aotearoa as well. Which would be fine except for a long time National was advocating tax cuts when faced with the growing pandemic crisis overseas. It was only after the government implemented a ban on all students from China that Mr Bridges fell in line with travel bans for people from affected nations.

Mr Bridges also strongly advocated more border controls; more testing; and more tracing. He made no mention of strengthening the lock-down and closure of non-essential businesses. He is mostly silent on the issue, as National is well known for it’s strong link to the business community.

Interestingly, the Word of the Day for Simon Bridges seemed to be “agile”; used so many times during the interview that this blogger lost count. “Let’s be agile” and variations thereof was his mantra.

An interview with ACT MP; libertarian, and spokesperson for promoting the spread of the covid19 virus, David Seymour followed. His concern for privacy and individual liberties would be laughable considering ACT’s  past support for increasing surveillance powers for the GCSB, Police, and SIS.

The covid19 virus would like to thank Mr Seymour for his support.

Following David Seymour, Dr Mel Bunce from the University of London gave her thoughts on the state of the media, as revenue from advertising dried up, weakening the fourth estate when it was needed most to report on the worst epidemic in 102 years.

She suggested that the proposed merger of NZME and Stuff was a two-edged sword. On the one hand a larger corporate entity might weather the current economic melt-down better than two smaller companies.

But on the other hand, she pointed to Bauer Media Group suffering financially and closing many of Aotearoa’s most well-known magazines as it withdrew it’s operations. She said a similar fate to a merged NZME/Stuff could  close up to 90% of the country’s media.

Rodney Jones from Wigram Capital Advisors offered his insights and research that China had under-reported deaths in their country by up to 40,000. He said we could not look to China for solutions because we coulkd not trust their data. He suggested that China will have negative GDP this year.

He also questioned how the pandemic would impact on globalisation – echoing the sentiments by others that the virus would do to neo-liberalism which progressives had failed to achieve.

Jack Tame finished the programme with a statement that Q+A would be doing another episode during Easter  (unlike it’s counterpart on TV3).

After lunch, sticking to the stay at home,exercise locally protocol I went for a walk around the block. The weather was fine and it was perfect to enjoy the quiet of a Level 4 Lock Down Sunday.

Unable to procrastinate any longer, it was time to pull out the lawn-mower and attack three (more like four?) weeks of turf growth.It’s unfair, I said to some passers-by: lawn-mowing should not be required during the Virus Apocalypse…

Did Bruno Lawrence have to mow his lawns in The Quiet Earth? Will Smith in I am Legend? Charlton Heston in The Omega Man? Grass continues to grow despite the slow collapse of civilisation-as-we-know-it…

At 1pm, Jacinda Ardern and Ashleigh Bloomfield make a televised address to the country. The latest figures are disclosed. There are more cases of covid19 and two more infection “clusters”.

Worryingly three people are in ICU – two are critical. Our death toll may rise.

Ms Ardern then made a rare departure from form, referring to “idiots” who are not taking the crisis seriously. She refers to the moron in Dunedin who deliberately coughed and sneezed at people whilst filming himself and uploading it onto social media. He has since been arrested and charged.

Standing on my front lawn at 1.55 – just in time to see a “boy”-racer (in late 20s, early 30s? too old to be a “boy” racer?) roar past at high speed. Seconds later, the sound of a police siren and a police car appears from around the corner, flying past in hot pursuit.

“He went that way!” thumb pointing, as I ‘helpfully’ called out to the police car (it was unlikely he heard me in the 1 second he sped by).

Who said that lock-downs were boring? I was witnessing a live-action episode of “Police Ten-Seven” in front of my own house!

(The one positive thing about near empty streets?  Police chases become less problematic with fewer vehicles on the road and pedestrians out and about.)

That evening, I ‘Skyped’ my parents. They are in self-isolation. The pandemic affects their region as well.

With their age and under-lying medical conditions, a covid19 infection would make life very hard for them. It took a while to explain what Aotearoa’s lock-down meant and why only (supposedly) essential services were allowed to open. I described what a “bubble” meant and how – if it was religiously followed – it would stop the virus from transmitting to others. I explained it was legally backed up by a declaration of a State of Emergency and the edict to stay home and exercise locally was not a Take-It-Or-Leave-It choice (David Clark, take note!).

My youngest sibling, who has severe multiple sclerosis, is in strict quarantine by his carers. For him, covid19 would be an automatic, quick death sentence.

Following my parents, I ‘Skyped’ my partner. It’s been nearly three weeks since I last saw her in person. It was a joy to see her face and we spent half an hour or more sharing what we had done today; the short-lived excitement of witnessing a police-chase in my own street. There was cheeky banter exchanged and our plans for tomorrow. She is still working long hours for her organisation, though it’s done from home by phone, ‘Skype’, or video conferencing.

Tomorrow we begin Week 3 of lock-down.

Whether or not we begin to control the virus and see fewer people fall victim to it depends on what we do collectively. In short, it’s up to us.

The Daily Blog: What kind of Police State do you call this? Why Faafoi & Clark should get slapped and what the hell is the CTU doing?

The Warehouse – where everyone gets a virus

Life in Lock Down: Day 1

Life in Lock Down: Day 2

Life in Lock Down: Day 3

Life in Lock Down: Day 4

Life in Lock Down: Day 5

Life in Lock Down: Day 6

Life in Lock Down: Day 7

Life in Lock Down: Day 8

Life in Lock Down: Day 9 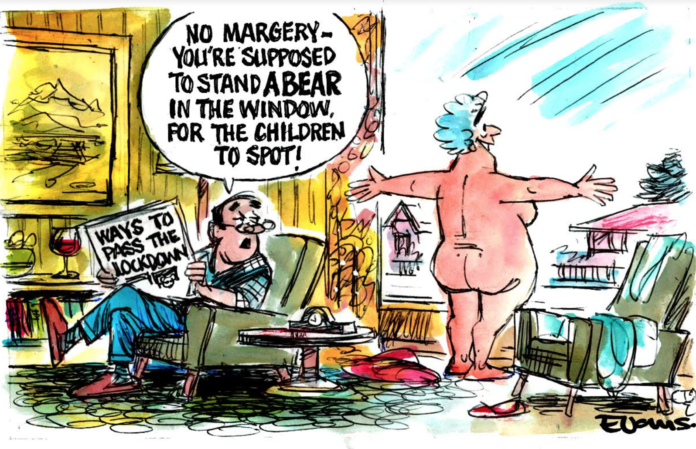 This blogpost will be re-published in five days on “Frankly Speaking“. Reader’s comments may be left here (The Daily Blog) or there (Frankly Speaking).

END_OF_DOCUMENT_TOKEN_TO_BE_REPLACED

SAN ANTONIO – A convicted thief who was once referred to by