By: admin
In: Fertilization and Weed Control 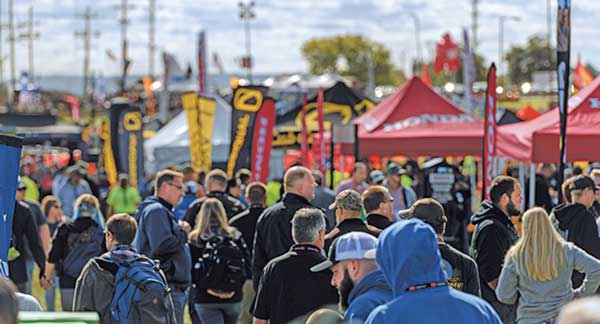 On hold While Louisville won’t see 16,000-plus GIE+EXPO attendees this year, show organizers are hopeful the 2021 show will be booming. (Photo: Brian Bohannon Photography)

There’s a deer somewhere that will regret the 2020 GIE+EXPO show not happening. That’s because the cancellation of the show means there will be one more hunter in the Minnesota woods this October.

“For me, this will be the first time in 20 years — maybe longer — that I won’t be going to Louisville in October,” says Scott Kinkead, executive vice president of Minnesota-based Turfco Manufacturing. “Maybe I’ll go hunting that weekend.”

From that poor deer to the people at John Deere, the COVID-19 pandemic causing the cancellation of GIE+EXPO has many in the industry feeling blue.

“We were disappointed we wouldn’t be heading to Louisville in October, but we fully support OPEI’s decision to put the safety of show attendees and exhibitors as the top priority this year,” says James Dutton, marketing manager for John Deere. “This is a resilient industry that knows how to roll with the punches.”

Outdoor Power Equipment Institute (OPEI) President and CEO Kris Kiser announced in late July that GIE+EXPO was being postponed to 2021. This was a change in position from May, when the plan was to host the show safely. As everyone has learned this year, plans can change quickly.

“We had hoped to have the show — we believed we could get it done safely, with protocols in place,” Kiser told LM in a Zoom interview recorded on July 29, that can be watched here. “It was all going in the right direction, and then two, three weeks ago, we saw the explosion and the virus has reasserted …”

Kiser says a lot of deliberation went into the decision to postpone the show to 2021, including meetings with the National Association of Landscape Professionals (NALP), the Professional Grounds Management Society and OPEI’s board of directors, and it went all the way up to the governor’s office in Kentucky.

“It goes to show you how serious professionals are taking the pandemic,” says Marty Grunder, CEO of Grunder Landscaping Co. and The Grow Group in Dayton, Ohio. “I’m sure it’s creating a great heartache for OPEI and NALP … but it speaks to their care for others over profit.”

Kiser acknowledges that it is a serious blow for OPEI that the association will have to overcome.

“It’s a real hit to us. We’ll have to find ways to make up the deficit,” Kiser says. “It’s a significant fiscal loss. If we lost the building or an airplane came down, those are the kinds of things we are insured for, but we’re not covered for the virus/pandemic — it’s a significant challenge.” 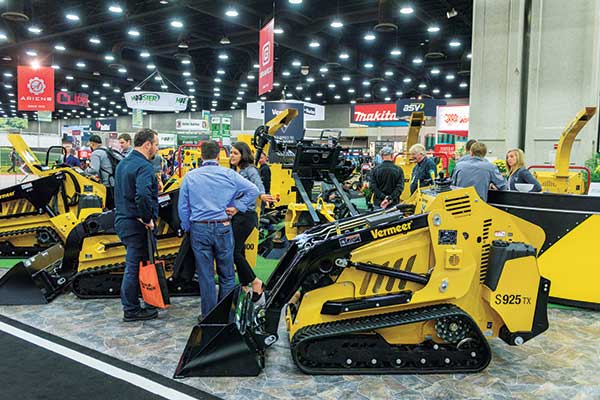 While OPEI will take a big hit by losing the show, other parties are also affected, including the city of Louisville, the 1,000-plus exhibitors and 16,000-plus attendees. So, what now?

Biggest show in the industry

Russell Skipper, owner of Solid Green Lawn & Landscape in Atlanta, says the lack of the show will hurt morale at his company and also limit his team’s ability to see new equipment that could improve his operation.

“It’s nice to be able to demo equipment,” Skipper says. “My guys can get on these machines and see if it will make their lives easier and bring that to my attention. It’s also a way to appreciate my guys, take them to the Brazilian steakhouse and recharge.”

The good news is Skipper says his business, which provides primarily fertilization and weed control, is booming. The company has picked up almost 200 accounts this summer, growing to 1,000 accounts. He is encouraged by the good year and is looking to find a different way to reward his crew.

“Like everyone, we have had to readjust and keep going,” Skipper says. “I’m going to take my guys on an offshore fishing trip to Florida to show them my appreciation and reconnect. I’ll do that in lieu of GIE+EXPO this year.”

Greg Burghall, president of GroGreen Lawn Care in Ontario, Canada, says he is in the middle of his busiest year yet, with many residents investing in their home outdoor spaces. While missing this year’s GIE+EXPO show won’t directly affect his day-to-day operation, he says it will hurt his opportunity to become more innovative.

“Last year, I bought a Steel Green ride-on sprayer, and it has changed the way we do business,” Burghall says. “I get inspiration from that show. We have a landscape show here every January, but (GIE+EXPO) is multiple times bigger. I’ve made friends there, I love it … I’m going to miss it.”

Brandon Hyde, vice president of Hyde Park Landscape, Norwich, Conn., attends GIE+EXPO every other year. This year would have been his year to go. He values the event so much he plans to make accommodations to attend in 2021.

“The seminars are phenomenal,” Hyde says. “They honestly get me pumped up, bringing fresh ideas to the company. On the trade show end, to see all the new products, it’s a decision you can make. Two years ago, I went looking for a skid-steer, and I went and sat in all of them, felt them all out. I was able to make a good decision when we got back home. Furthermore, it’s seeing products that we don’t go there for, it’s seeing new things we didn’t even know were in the industry, or maybe they’re popular in another industry.” 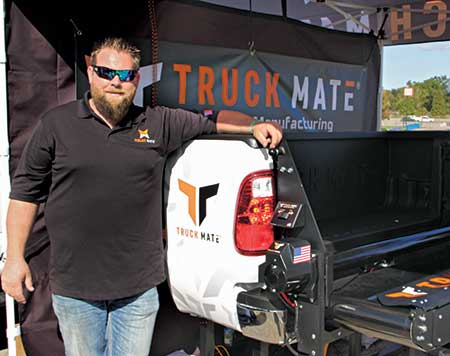 Eyes on the product Nick Carlson of Mulch Mate says his company will still launch a new product next month. (Photo: LM Staff)

Hyde says the skid-steer he selected in 2018 was a Bobcat 650, and the crew loves it. He adds that he believes next year’s GIE+EXPO will be a special one.

While attendees are certainly disappointed, exhibitors also have found themselves without an outlet they’ve come to rely on for nearly four decades. Along with proving their equipment in the demo area and showing off their wares on the trade show floor, there’s also the loss of the face-to-face meetings with end users.

“By far, the best part of GIE+EXPO is connecting with customers,” says John Deere’s Dutton. “Having the opportunity for face-to-face conversations helps us better understand their needs and how John Deere can provide them with even better products and services.”

Dutton says Deere has new products the company will launch in October and to “stay tuned.” Turfco’s Kinkead says his company also has new products it’ll be launching, and he jokes he might now drive some of that equipment to the front lawn of the nearest LM editor.

“We want people to see the quality we put in our products,” Kinkead says. “We want to make landscapers more productive and profitable; we want to help them grow their business. And, there’s value in connecting with people who already own our stuff. It’s a big deal (not to have GIE+EXPO). You want to be busy from sunup to sundown.” 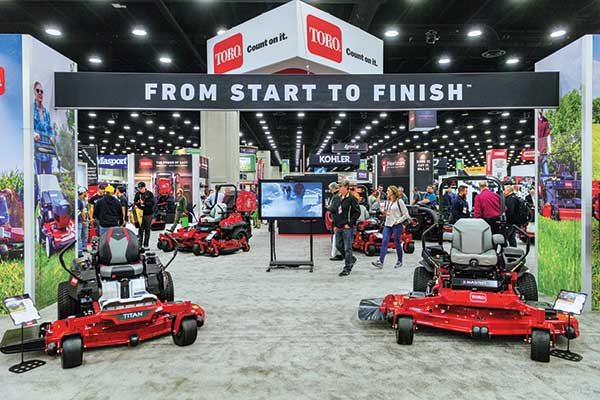 Kinkead says his company is investing in ways to show its equipment virtually. He also adds his team members are still traveling to visit with customers — they’re just driving and not flying.

Nick Carlson, CEO and founder of Mulch Mate, says his team was looking forward to building on its forward momentum from last year’s show, when the company unveiled the Truck Mate and the Kart Mate. Though he says he’s “bummed” that the show won’t go on, he says he understands the decision because he’s gotten sick after attending a trade show in the past.

Mulch Mate will launch another new product next month, Carlson says, and he is still weighing options on how to get the most eyes possible on the new creation. In the meantime, he says there’s no way for him to replace the in-person relationship building he values.

“It’s like Chick-fil-A: The food is good, but it’s more about the service,” Carlson says. “We try to portray that. We try to set a new bar, a new standard. (At GIE+EXPO), we literally have customers come to our booth and help us sell products for us. To not meet face to face hurts.”

Another group disappointed to see the 16,000-plus GIE+EXPO attendees not making the trip this year is the city of Louisville. GIE+EXPO brings more than $17 million in tourism value to the city, according to Karen Williams, president and CEO of the Louisville Convention and Visitors Bureau. Williams has been working in her office every day since the beginning of the pandemic and says she can feel the absence of the many conventions that call Louisville home.

“It’s not only the weight of not having the GIE+EXPO but the void of the hustle and bustle on Fourth Street Live and the restaurants,” she says.

Williams says 60,000 people work in the hospitality industry in Louisville, and she estimates that 70 percent or more are currently laid off. The Kentucky Derby, rescheduled for Labor Day weekend, will happen without fans. She says the race normally brings $400 million to the city, but estimates this year will be closer to $10 million.

“Everyone here is so familiar with GIE+EXPO; we know what to expect from attendees,” Williams says. “They visit the attractions, and they stay afterward. The city truly appreciates the show, and we hated to say that we couldn’t host it.”

David S. Beck, president and CEO of Kentucky Venues, echoes Williams’ sentiment and says they are learning each day at the Kentucky Exposition Center how to host a safe event. The Kentucky State Fair has been successful, though with less people. The annual Street Rod Nationals built morale for the community, he says, but he adds that it had half its normal attendance, dropping from 30,000 people to 15,000.

“All of these are building blocks to the next level,” Beck says. “It’s a puzzle. But, I feel good about our team. We’re setting the example of how to be safe, so we can exceed those requirements. It’s a partnership (with GIE+EXPO). They’re the kind of people that if they want to do it, they’ll do it right. Next year will be bigger and better.”

“We have a great track record, 38 years of meeting the needs of our exhibitors,” Kiser says. “We expect a dynamic, door-busting event next year. The city really wants to welcome us back. We’re excited to shift the focus to 2021 to being the biggest show ever.”